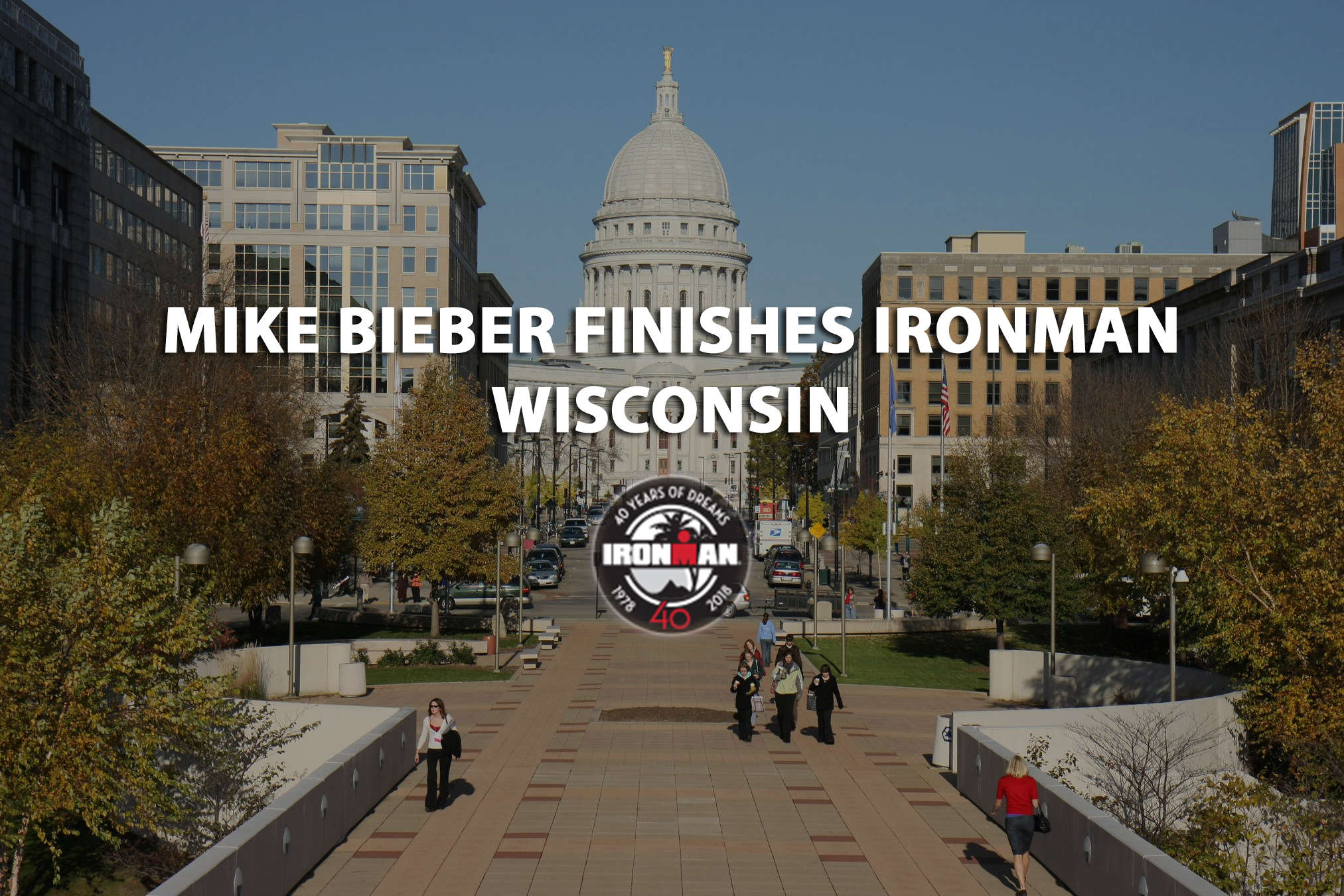 Congratulations to our Sales/Triathlon Specialist Mike Bieber who finished IRONMAN Wisconsin. Read about his huge accomplishment below:

First I want to say thank you for all those who encouraged me throughout the race and all the prep it took to get there. The short version of the race is that the swim went well and I earned a PR in choppy water. Cramped halfway through the bike ride and fought that the rest of the day. Gave it what I had on the run and my body gave out at mile 14. Made the finish, but almost 2 hours behind my goal time.

Now, for those who wish to read the long version, here you go!

The day started well. After concerns of not having the swim because of all the flooding in Madison, we were rewarded with a sunny morning and water quality good enough to go for it. While choppier than the last 2x I have done IMWI, I stayed in rhythm and nailed a 3 minute personal best on the swim. (Despite what the IM tracker says, I did NOT swim a 47, it was a 68. Trying to get that corrected to give credit to whoever it is due to).

Moving in to T1 I was feeling really good. Got the wetsuit stripped off, but somewhere in between there and the changing area, my timing chip was lost. T1 went smooth until reaching the timing people who seemed unprepared to actually replace lost chips. This cost me a couple minutes but nothing horrible.

Getting on the bike felt natural. All the time on it in training had me ready for pretty much anything. The predicted winds didn't worry me as I have ridden in much worse. Went about it like a normal training day and did my thing. Nailed hydration and nutrition exactly how I wanted and was cruising through the first 56. Almost exactly at the 60 mile mark I started to experience cramping in my right adductor and gracilis muscles, which I have had a couple times in training. Managed to fight off the cramping before it went full-fledged lock up, but the last 52 miles were spent pedaling very tentatively as it seemed any steady, sustained efforts into what seemed like a building headwind brought the cramping back. Stomach started feeling a little off but nothing out of the ordinary. Electrolytes and hydration were on target so I am currently as a loss as to why it happened since previous experiences were related directly to poor hydration. Investigating possible causes so that I can work toward eliminating the issue.

Rolled in to T2 feeling pretty fresh (energy wise) as the ride was significantly lower effort than standard. I was relatively quick through transition and pretty much decided that if I wanted a chance to save the day, I needed to settle in to my standard training pace and hold on for as long as I could.

The marathon started well for me. I hit 7:20 or better for my first 4 miles and then brought it back to about 8:00 minute mile with strategic uphill/downhill walks to save my quads. (Was on 3:40 marathon pace through 13.1) This took me through mile 14, where it promptly all fell apart. Grabbed some water at an aid station just past 14 and made my way directly to the garbage where I threw up everything I had been trying to keep down. After this the only thing I could manage was water and even that wasn't sitting well. Watching my race slip away from me, I tried to get going a couple times, but couldn't muster anything more than a walk without severe GI distress and muscle cramping. I had to remind myself to keep moving forward and that as long as I put one foot in front of the other, I would eventually get to the line. Those last 12 miles were a long walk that took well over 3 hours, but I made it.

Ironman is a challenge that can bring with it great joy, pain, or sadness. I saw all of it on the course on Sunday, both in myself and in the athletes I shared the day with.
While there are too many to list every one, a shout out to several NOW customers including: Tim Brown for his AG win and Kona qualification, Josh Mork on a smoking 9:44 debut, and Mike Drikakis and Rachel Williams for their first time finishes!  For those I missed, congrats to you as well!

It wasn't what I wanted, but I am a 3x IMWI finisher.